Hi everyone, long time no see!

It’s been a while since my last post (more than two months), and back than I sort of hinted that in a week or two I’ll be ready to present the next game I’m working on 😀 …

Here is what happened:

I’ve been working on the prototype of this project of mine, coding the core features zealously, filling my design doc with cool ideas, but the mechanics simply did not add up. The concept on paper sounded really cool and straightforward, but the actual fine-detail design and implementation was nightmarish. I hit a lot of roadblocks during the formalization of the rules and I had to redesign some mechanics and re-implement parts of the prototype a couple of times 😦 .

Takeaway:
What sounds as a nice and simple concept on paper may bite you in the a$$ during realization…
“The devil is in the details!”

Okay, so the prototype is ready now (playable and feels good) and I’m ready to present it. I took some pictures and some game-play footage, but keep in mind, that the game is filled with placeholder art and is heavily work-in-progress currently!

A real-time strategy puzzle game which plays with the idea that the workings of the whole universe could actually be described by one formula, one grand rule.

A little about how it works and how it looks currently: 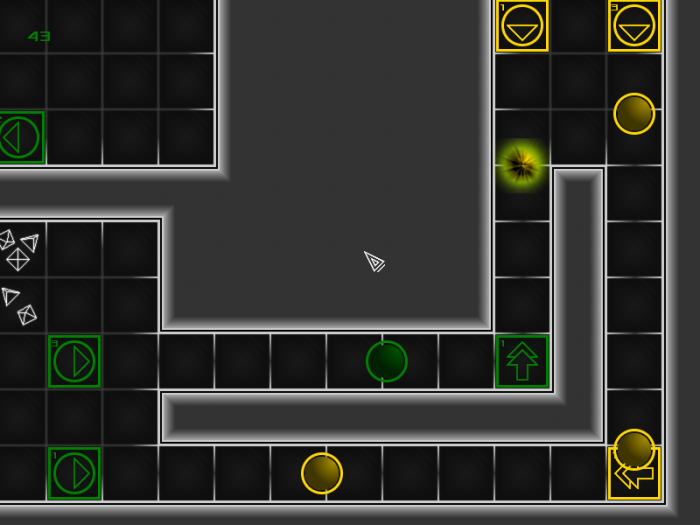 The core concept is simple. Take a real-time strategy game like Starcraft, but remove all the units except for the worker one. Unified Theory will contain only one “unit”, but will feature all the common tasks of arcade RTS games like: mining, building, research, upgrades, tech-trees and battles. Another BIG gotcha, is that you have no direct control over your units, but they march blindly towards the direction they started out when they were created! You will only be able to place buildings on the levels to interact with your units, and to actually solve logistic and management problems (and later to battle enemies) by controlling your “army” indirectly. Due to these rules, the game is probably more closer in controls and feel to a Tower-defense game or a management game focusing on base building, than to an arcade RTS.

To better showcase how this works in action I’ve captured a little footage of me playing with the current prototype build:

And why is this a puzzle game? Well, in its current state it is not, but the “campaign” levels of the game will focus more on solving puzzles related to level traversal, logistics and management of your base with serious constrains (resources and/or technology), so the final version will feature equal parts strategy and puzzle solving.

What is this “one formula” technobabble story?! Well, the core of the game is a really really really simple discrete math construct (cellular automaton), but it can actually be used for really complex stuff (like programming/calculating anything 🙂 ). I’m being constantly amazed by these seemingly simple but infinitely deep systems and the intricate connections of math and nature. This fueled me to choose this theme as the “story”, to tell about the beauty of this phenomenon instead of having a classical plot where faction A fights faction B for glory and whatnot…
I still have to work out the detailed structure and presentation of this “narrative”. Will see how this goes, fingers crossed 🙂 .

The plan, whats next:

In the upcoming week or two I will work on the look and feel of the game and make it more appealing and accessible. When this is done and the game more closely resembles my final vision, I will release an open alpha version. The goal with this build is to gather feedback on the core mechanic and the accessibility of the game. Plus I’m hoping it will start building some “traction” for the siege of the gates of castle Steam, the holy battle to acquire the legendary green-light 🙂 . Most probably I will keep it updated and re-release it with the final version as a demo.

This alpha build is the next big step, but afterwards I will focus on building an engaging campaign full of puzzles and strategic levels.