Skip to content
HomeI Am Overburdened, light at the end of the tunnel

I took my time again to make this new post, but I was really occupied with life and stuff and took approximately two weeks off from work (got married ❤ + been pretty sick for a week 😦 ). Last week was only spent on polish and adding "extra" features, so it is only a matter of a few weeks to finally tackle this beast of a game 🙂 , I'm almost at the end of this marathon!

I'm also trying a new vlog format this time, with more video content and less slides. It is a video log after all 😉 …
I hope you all will like it.

I extended the implementation of my “semi-procedural” map generator algorithm with a neat and simple trick. It is working from hand authored map templates, so I added the possibility to randomly flip over the vertical and/or horizontal axes! 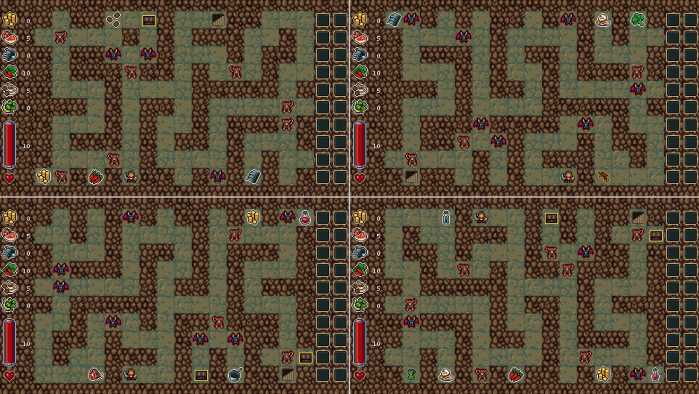 For the 4 resulting maps on that screen the exact same handmade tile-map template was used. This results in 2 to 4 (if you can use both axes) times the possibilities of slightly different generated maps for the same amount of hand made maps 😉 .

Each level type has a unique name now 🙂 + when you enter a level you get a notification about where you are in the dungeon/story:

I’m still not 100% satisfied with this level change pacing/effect. I may add a really tiny “to black-screen and back” transition effect too. I’ll try it out and see whether it works better…

These fancy text graphics are pretty useful for delivering help notifications, narrator or character speeches and to convey more details about the world to the players.

I also implemented some features to make them easier to control and more readable:

Some conversations and player speeches will occur during the game-play too, not just in the “menu”.

The game has only static sprites, no hand-drawn or any key-frame based animations at all. So far I tried my best to move the sprites in a way, that make all the motions look fluid, but I always had plans to go further than that! I wanted to achieve a look, regardless of having no “proper” animations, that is interesting, at least a little bit.

I implemented an animated “stretch and squeeze” transformation for sprites and added a subtle one to the hitting obstacles/walls movement of the player character.

As the next step I added stretch, squeeze and shake to sprites at various points during battle.

These GIFs have “New & Old” slides for comparison, but it’s fun to check back how the game looked few months ago. Here goes the “same” battle from an early version:

I’m really proud how much I could achieve with only “static” sprites 🙂 .

I wanted to further enhance the user interface too, not only the in-game action, so I added a small and short “Back Out” ease to item pickup sprites to make them pop:

I still have plans for more animation enhancements, but it is already August and I still have a lot of other tasks to take care about before releasing this game, so it most probably will have to suffice.

I integrated some systems into the game last week which I deemed “extra” previously, but as I mentioned around a month ago, I want to make the most out of this game, and completionist players (myself included 😛 😀 ) are going to love this 😉 !

Now you can gather detailed information about the monsters and artifacts of the game. After several kills you can unlock a monster (weaker ones need more kills) and after a few pickups you can unlock an artifact (rare ones need less pickups). 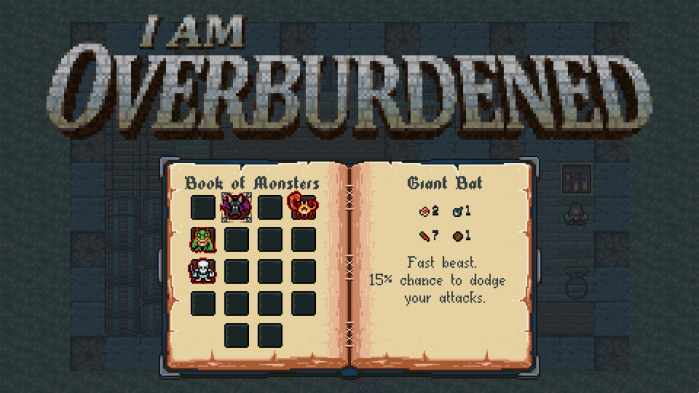 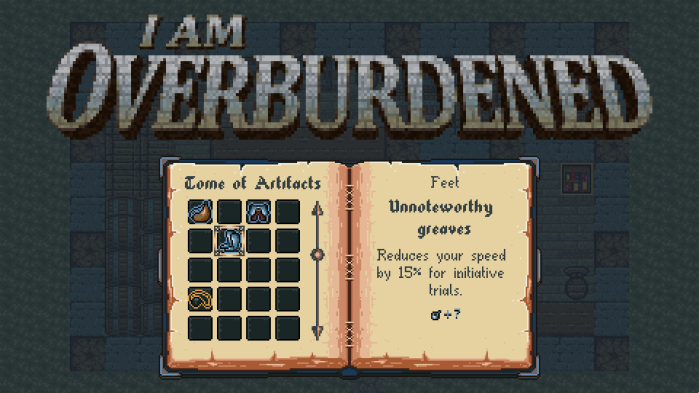 There is an extra secret monster unlock too, which you have to look for carefully during a play-through, its hidden well 😛 . There will be more traditional achievements too, but they are currently in the design phase, so nothing to show yet.

I also ~finalized my “elevator pitch” for press/buyers:
I Am Overburdened, a silly roguelike with 20 inventory slots
Tell me what you think!

I’ll be back in a week or two with more news on the game 😉 .

Thanks for reading!
Take care.

2 thoughts on “I Am Overburdened, light at the end of the tunnel”